I mentioned a few months ago that I really wanted to rejoin I.O.L.I., in part so that I could get access to their back issues for less than the cost of buying them at $5 an issue. So the wonderful

aluminmug gave me the money to renew my membership.

Last week I got the newest issue of the quarterly bulletin, which included an article on Metal thread for lace as well as a continuation of the series of articles on lace from the SCA time period. One of the other things it had was a notice that the Smithsonian Museum of American History does a back room tour of their laces on the 4th Thursday of each month. So I called and was able to get into the tour for this month (there is a limit of 8 people per tour).

This morning I got up, sent some time working on my room then got dressed and headed out. I THOUGHT that giving myself an hour would be plenty of time considering I live less than 10 minutes from a metro stop. The last time I rode the metro I didn't have a big problem finding a parking space. But this time I was feeling rushed and the only parking spot I could find was in the reserved section which requires a parking permit until either 9:30 or 10 (I forget which). I did consider parking in one of those spaces since it was just about 9:30 but as I was sitting there a Metro employee pulled up and started looking like he was going to write tickets. Now I'm willing to risk a ticket in this type of situation at times but not when I can see it's definitely going to happen.

So that left me with trying to figure out what I was going to do with the time I'd spent looking for a parking spot now gone. I decided that the next step was to drive downtown and park at the Regan Building which is about a block from the museum. Cue hitting every red light. By the time I was waiting for security to clear me into the garage I ended up calling ahead to let them know that I'd be about 10 minutes late.

When I went down to find a parking space I was having a problem and somehow ended up on the bottom floor of the garage. I found a place but it was one where you needed to leave your car keys with a valet so they can move it if necessary. I asked the valet if the spot was some place I could park and he said it was a monthly parking thing. But since I was only going to be there for less than four hours he said it would be okay - of course he wanted a tip before I headed out. But since at this point it was 10 am I ended up deciding to go with it.

I got to the meeting point before the tour left and found that there were 3 other people on the tour. Two of them came from The Piedmont Virginia Lace Guild. The other one was there because she was friends with someone who makes lace but I didn't catch where she was from. As we were walking toward the lace room I got asked about my komen hat. At some point I said I was SCA and one of the ladies said "I thought so" and said that she used to be part of the SCA.

The Volunteer who headed the tour was Karen Thompson who has written a couple of articles on lace for Piecework Magazine including one on Lacemaking in Ipswich in the May/June 2008 issue.

frederich's camera and I wasn't sure how to get it to take good pictures without a flash I ended up deciding not to take pictures. The one lady I was talking to had brought her camera and she took pictures until her battery ran out. She said that she would let me see the pictures and I told her that I have a flickr account with unlimited uploads so if she sends me the pictures I can go ahead and upload them all. I really hope that happens because the one advantage of huge amounts of mega pixels is that it will allow me to have extreme close ups of the lace. Since I couldn't get the ele-cheepo magnifying glasses they had to work I'm looking forward to the chance to see details that I couldn't see in person. Plus, someday I want to go take the tour again with my own magnifying glass.

The lace was GORGEOUS and they have quite a bit of it. One of the pieces they have is Alençon lace that is rumored to come from a bed set commissioned by Napoleon I. Another piece, which is modern lace, is a lace "Bayeux Tapestry".

We also discussed the fact that all of their lace has been photographed and they are in the process of putting it into a database which will eventually be visable on the web.

When the two hours was up the tour was over and we all split up. As we were getting ready to go I gave my card to the lady who had been taking the pictures. She'd mentioned that we'd probably met several years ago and once she had my card she said "Orla! We've met before! I used to hang out with Brenna and Bambi..." Then she went on to say that she had a couple of different personas but the one she was more well known as was Isdahara - at which point I said "hey I know that name!"

Before we split up I mentioned the Plimoth Jacket project and the fact that you can still get the lace kit - it's still on my mind because I'm currently working on that lace.

I was the only one planning on staying for the lace demo that was scheduled for 1 pm. But after I quickly walked through the newly revamped exhibit showing the big American flag and visited the lace pillow from Ipswich I realized that it was still half an hour before the demo started. Since I was fretting about having left my car in a place it really shouldn't be I decided to leave.

So I headed back to the Regan building and it took me a while to get through the line due to security (mental note - they have the metal detector set so high that the pins in my hat set it off).

So that was the first lace day of the week. The second one will take place on Saturday when I finally make it to a Chesapeake Region Lace Guild Lace Day! 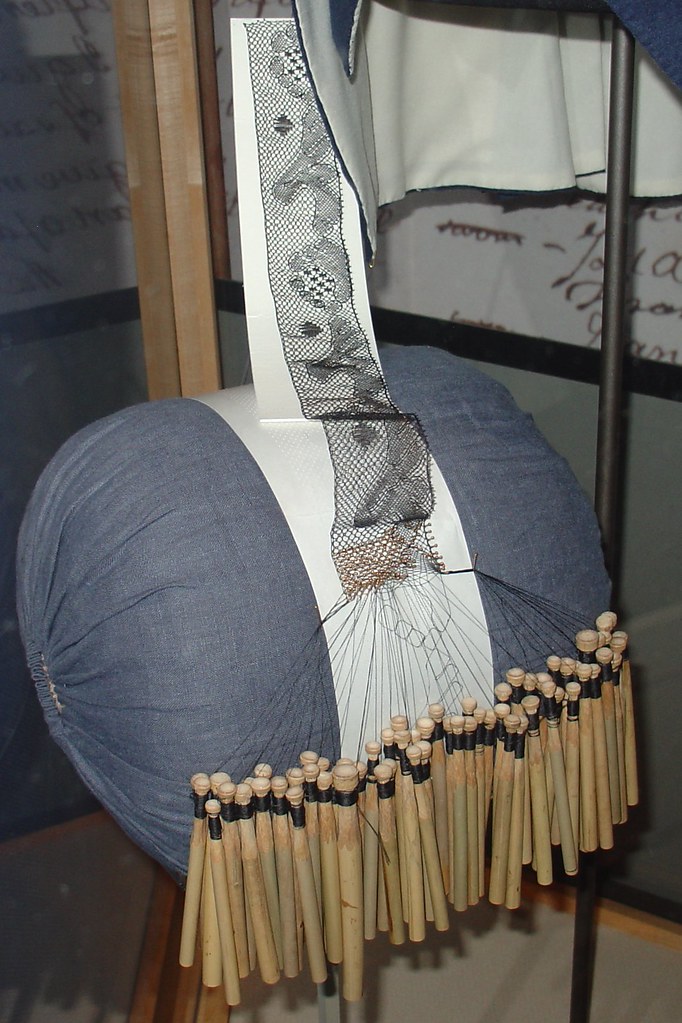 The Ipswich lace pillow on display at the Smithsonian
Collapse